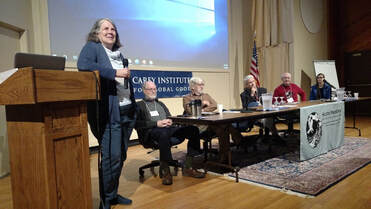 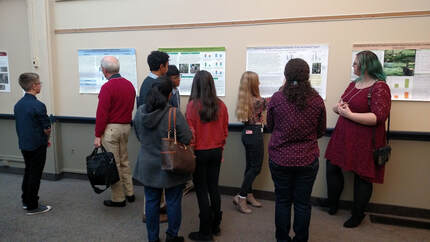 2019 Wildlife Ecology Research Program high school students explain their summer projects in the afternoon poster session.
“Let’s not wait another 80 years to do this again,” Tom Alworth, Deputy Commissioner of New York State’s Office of Parks, Recreation and Historic Preservation, told a workshop audience on the afternoon of November 2, 2019. Alworth, who conducted research on wren nesting habits at the Huyck Preserve in the 1990s was joking, a little. His sentiment was meant to underscore the value of gathering current and past students, interns, and research fellows of the Huyck Preserve as well as educators, community, and board members to pursue the central theme of the Huyck Preserve’s 80th Anniversary Research Celebration: What is a field station and why are field stations important?

During the one-day conference, held at the nearby Carey Institute’s conference center overlooking Lake Myosotis, there were many and varied answers to that question among the nearly 100 participants. The answers highlight the reasons why we must share more widely the rich scientific history of the Huyck Preserve’s field station, which has continuously hosted researchers since 1939, and not delay convening again to determine how the Preserve’s research program will best be supported and utilized well into the future.

At the morning plenary, Huyck research alumnus and UAlbany Professor Emeritus George Robinson, PhD., emphasized that field stations are secure places to observe biological phenomena over a long period of time, and as such, offer a unique resource. Joan Herbers, PhD., also a longtime Huyck researcher as well as Ohio State University Dean and Professor Emerita, stressed that field stations like ours offer opportunities to identify scientific problems that could not be identified any other way. She cited her own research on ant colonies as an example. Huyck researcher Meghan Barrett, a PhD candidate at Drexel University, talked about the differences between field biology and conventional laboratory work, especially the value of making observations in a field setting. She also encouraged attendees to communicate about their scientific work through social media, and described some ways of doing so. 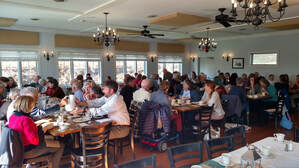 Participants enjoy lunch at the Carriage House Restaurant at the Carey Institute.
Later, after lunch, three concurrent breakout sessions echoed morning plenary participants’ insights, and allowed conference-goers to delve more deeply into three relevant topics: the importance of long-term research at the field station; the role of the Huyck Preserve and other field stations in networking and supporting scientists throughout their careers from student to senior researcher; and the importance of communicating science effectively with the public. They were each enthusiastically attended and combined speaker presentations with audience Q&A and group discussion.
​
As the afternoon sessions drew to a close, many attendees headed out to the Preserve to hike trails or visit the Helderberg Brewery for a craft beverage and further conversation, while research alumni recorded interviews of their time at the field station. The discussions, connections, and ideas generated at November’s conference are leading efforts for future steps and programming at the Preserve’s Biological Field Station — including gathering our alumni and other research constituents more frequently.
RETURN TO NEWSLETTER MAIN PAGE