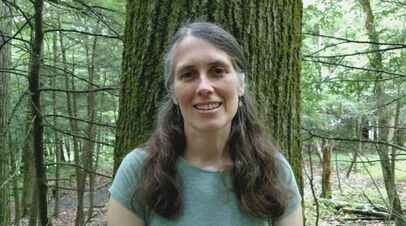 Anne was the Director of Conservation and Education starting in 2017 and became the Preserve's Executive Director in July 2019.  Anne has been a member of the Preserve since moving to the area with her family in 2009.  The multi-pronged mission of the Preserve attracted Anne, while her children fell in love with the waterfall, lake, and boardwalk trails.

Anne holds a Ph.D. from Brown University where she focused her research on forest ecology and the impacts of human and natural disturbances on forest communities.  She has always been passionate about environmental protection and knew from the outset that she would apply her knowledge of natural systems to working in land conservation.

As Executive Director, Anne oversees the Preserve's operations and is also the staff member responsible for the education and research programs.  She loves connecting the local community and region with the land through education and stewardship and enjoys using her research background to build connections between researchers and the public.  Anne loves that the Huyck Preserve plays such a vital role in our community and strongly believes that exposing people to the wonders of nature through field trips, summer programs, and events for all ages positively impacts lives and is the best insurance for long-term environmental stewardship.  Contact Anne to share your ideas or for information on education programs, conservation initiatives, research opportunities, or ways you can be involved with the Preserve as a volunteer. 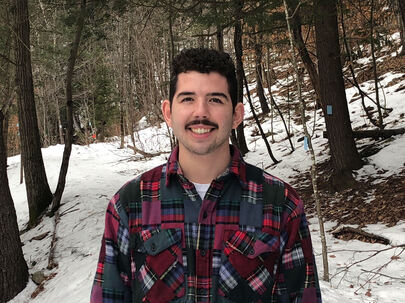 ​Garrett began working as the Stewardship Coordinator for the Huyck Preserve in January of 2020. He obtained a B.S. in Environmental Studies with a focus in Conservation and Stewardship from the University of Vermont. His interests lie within the protection and promotion of natural areas so their ecosystem services may be sustained and enjoyed well into the future. Garrett has had the opportunity to work for a variety of conservation-focused organizations in Maine and Vermont, including a state park, land trust, conservation commission, and a parks and recreation department. He looks forward to bringing the formative experiences that he has had in nature to the Huyck Preserve!

“But in every walk with nature one receives far more than he seeks.” - John Muir, 1918

Florence began working as the Membership and Outreach Coordinator at the Huyck Preserve in November 2021. Although her background is in fine arts, having studied illustration at the Rhode Island School of Design, she has always had a passion for the outdoors. Throughout her life, Florence has enjoyed hiking and walking through nature. Some of her favorite places to explore include the Adirondack High Peaks, Thacher Park, and, of course, the Huyck Preserve!

Kelly Martin
​
Kelly has been a New York State Wildlife Rehabilitator for many years and is the president of the NYS Wildlife Rehabilitation Council. She presents the summer Wildlife Family Hour program in which she guides families of all ages in short hikes and presents some of her educational animals. Kelly can be booked for presentations at the Preserve for school groups and other events. She can be seen at many of the annual events at the Preserve as well, such as the popular Winterfest in February or Owl Prowl in March.