Past Share Your Spaces Posts
Each Monday and Tuesday we are posting what we discover at the Huyck Preserve and in our own backyards.  Here are the posts from earlier weeks.  We hope you are enjoying these short educational opportunities as you spend time at home!

March 31, 2020
This week, Michaela, our Membership and Outreach Coordinator, wanted to share this picture of a beaver lodge next to her house. Beavers have sharp front teeth that let them cut down trees and saplings. They are called “ecosystem engineers” because of the way they build wetlands, thereby changing aquatic (in water) and terrestrial (on land) ecosystems. The resulting wetlands provide homes (habitat) for wildlife, filter water, and help prevent floods. Field trip friends, do you remember seeing a beaver dam at the Huyck Preserve?  We're sure they're keeping busy and will be ready for your return! 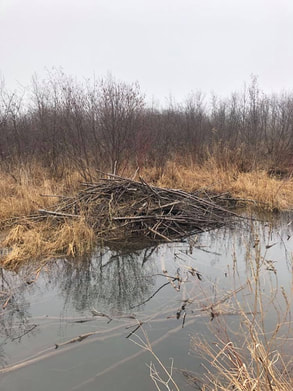 April 1, 2020
​We wanted to share with you a picture of Lake Myosotis taken on Tuesday (March 31st). As you can see, the ice has completely melted. Since last year, we have been recording “ice in” (complete freezing of the surface) and “ice out” (complete melting) dates. Last year, our lake didn’t lose its ice cover until April 15th. Two data points do not show long-term trends, but what impact might an earlier melt have? Why would it be a good idea for us to continue collecting these data?
Do you have any lakes or ponds on your land or in your neighborhood?  Did they thaw earlier this year, too? 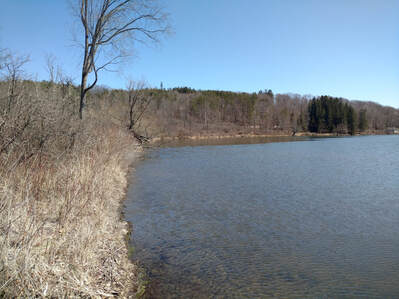 April 6, 2020
​This week, Michaela, our Membership and Outreach Coordinator, wanted to show you some scat (poop) she found in her driveway.  You might think this is a gross thing to share, but scat can be a valuable tool to help you identify wildlife in your area. Do you think you know who left these? ​ 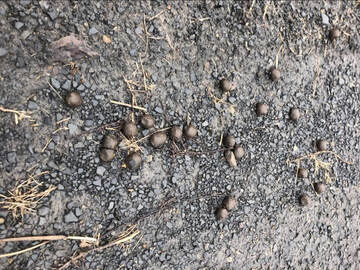 If you guessed a deer, you’d be right! The white-tailed deer lives throughout New York State, and is one of our most numerous mammals at the Preserve. Do you have deer on your land?  What other signs of deer could you look for?
April 13, 2020
Adam, our Buildings and Grounds Supervisor, took this photo earlier today. Although it is a bit far away, you can see a Bald Eagle perching in a tree above Lake Myosotis at the Huyck Preserve! The Bald Eagle is our national bird and at one time was endangered, largely due to the now banned pesticide DDT. Through conservation efforts, this bird of prey has rebounded. In 1995, the Bald Eagle was removed from the endangered species list, and it was taken off the threatened list in 2007. They are becoming increasingly common in New York, and at the Huyck Preserve. Have you seen any Bald Eagles in your backyard or near your house? Let us know! 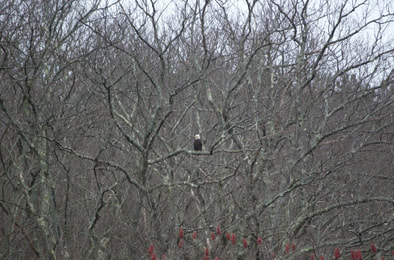 April 14, 2020
Are you familiar with the American beech tree? This native tree can grow quite tall, up to a height of 120 feet and was a dominant species in the northern hardwood forest before it became infected by beech bark disease (an invasive species first found in our region in the 1950’s). When healthy, you can identify this deciduous tree by its smooth, gray bark, and its shiny, dark green, pinnately-shaped leaves. What’s more, its nuts are an important food source for wildlife and are enjoyed by squirrels, raccoons, birds, and even bears. This relationship is important both for the wildlife and the trees. In fact, scientists believe it was blue jays carrying nuts that allowed beech to expand northward after the last glaciation.
Here, you can see a picture that our Stewardship Coordinator recently took of some beech nut husks. Some animal must have had a lucky day when they came upon this treat! Do you have any beech trees in your yard or nearby? What animals do you see nibbling away?
April 20, 2020
​
Is a mushroom a plant?

It is not, it is actually in its own kingdom! That is because unlike plants, fungi cannot make their own food. They get food by breaking down dead things, like logs. Mushrooms are a type of decomposer and are very important for the cycling of nutrients in the environment. Without decomposers, dead organisms and other waste would never break down and become part of the soil to be used again by plants and other organisms. The mushroom in this picture is a Hemlock varnish shelf found on a warm, wet day at the Preserve!

Brain Bending Fun Fact - Did you know that all mushrooms are fungi, but not all fungi are mushrooms?

Show us the mushrooms you find in your backyard on our Facebook page, and remember, many mushrooms can be poisonous, so we always advise you to look, but not touch. 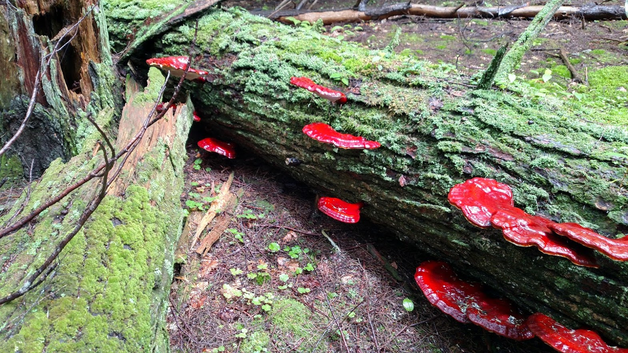 April 21, 2020
​
As we celebrate Earth Day this week we wanted to share with you a discovery that our Stewardship Coordinator stumbled upon in the woods. Not only is this skull a cool find, it is also a vital clue about the animals that call our forests home.
Looking at the teeth, we can see it has two large front incisors (teeth are missing), and then four quadrate (square) cheek teeth on each side. (As an aside, we have similar square teeth - our molars!) These teeth are excellent for dealing with plant matter, and the large front incisor teeth tell us we are looking at an animal in the rodent family. Do you have a guess at what animal this is?
If you guessed beaver, you’d be correct! Now it’s your turn. What skulls or other bones have you found around your home?
April 27, 2020
Today we wanted to share with you two pictures taken at our Executive Director, Anne Rhoads’ home. She has lichen growing on her trees and on some of the rocks in her yard. Field trip friends probably remember that we love to talk about lichen on hikes with students. You’ve probably seen lichen in your backyard, too, but do you know you are looking at a symbiotic relationship?
A lichen is actually two organisms, a fungus and a cyanobacteria or green alga, working together in a way that helps both organisms. The fungus provides the habitat needed by the alga, while the alga performs photosynthesis, drawing energy from the sun, and supplies nutrients to the fungus.
Lichen play a very important role in a healthy ecosystem. They are the first organisms to grow on bare rock, and, as they do, they secrete acids which over time allows soil to form. Because of this process, lichen are considered pioneer species in ecological succession, allowing other species to colonize the area over time. Lichen are also an indicator of ecosystem health because of their inability to survive with significant air pollution.
So what lichen do you see in your backyard? Do you have different kinds? What colors are they? Where are they growing? Can you think of any other symbiotic relationships in nature that you’ve observed?
April 28, 2020

Yesterday, we learned about lichen, and today we are sharing about moss. Some people confuse the two. Read on to find out how they are different!
Moss is a unique non-vascular plant in the phylum Bryophyta that often grows in shady, damp locations. Did you know that there are over 12,000 species of moss worldwide, and all of them produce spores rather than seeds as a method of reproduction? A patch of moss is made up of many tiny individual mosses. Mosses help to slow erosion by providing surface cover and absorbing water. One reason to avoid walking on slopes or rocks is that mosses growing there can be easily disturbed -- they have rhizoids to help anchor themselves to surfaces instead of deep roots.
So, moss (a plant) and lichen (a symbiotic relationship between fungus and alga) are completely unrelated although they sometimes grow in the same places. They also both act as pioneer species in ecological succession, being among the first species to colonize an area after a disturbance.
We certainly have our fair share of mosses at the Preserve! Be sure to look but not touch -- mosses are slow growing, and removing them greatly disturbs the community where they live.
May 11, 2020
For the next few Mondays, we are going to focus our Monday Kids Sharing Our Spaces posts on our staff’s favorite trees from their own backyards. Here is Membership and Outreach Coordinator Michaela Fisher’s favorite, the quaking aspen.
May 12, 2020
This photo was snapped (pun intended) by a member of the Preserve last week. The common snapping turtle is found as far north as Canada, and as far south as Florida. In the wild, these reptiles can live up to 30 years or more, and can weigh over 30 pounds!
Unlike other turtles in our region, snapping turtles cannot fully retreat into their shells. Because of this, biting with their sharp beak is one of their defense mechanisms. You don’t have to worry about that though, provided you don’t try to handle them. Snapping turtles aren't aggressive, and, in the water, they will swim away rather than confront you. If you see one on land, please give them space and keep an eye out for them along roadways! During this time of year females are looking for places to lay their eggs on land, which will then hatch out between August and October.
Photo Credit: Sarah Nelson 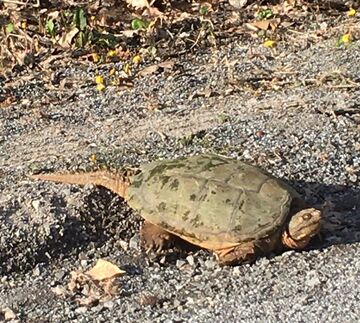