Our modern weather station outside of the Eldridge Research Center 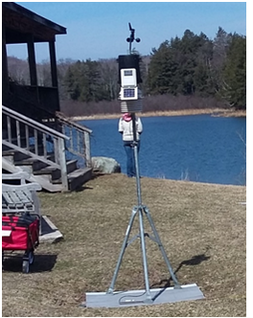 In 2018 the (2nd generation) weather station was moved away from the research center to give it a fuller exposure to the sky.
​For many people, their immediate interest in weather can be summarized as, “high, low, and how much snow?” But, for many of the Huyck Preserve’s researchers and other users who are interested in natural systems, questions about weather are deeper and the answers more significant. The impact of weather fluctuations on the activities and behaviors of organisms - from birds to trees - are often at the heart of researchers’ inquiries. Today, thanks to a partnership with the University of Albany, and the support of a generous Preserve member as well as several board members, the Huyck Preserve has a new, state-of-the-art weather monitoring tool. This will greatly aid scientists studying specific flora and fauna, and offer an enhanced ability to detect significant changes in climate relevant to the Preserve and its natural systems.

Since the beginning of the Huyck Preserve’s research program in 1938, the field station has served many scientists who have measured local weather with a variety of instruments. Thermometer readings for air, soil, and water temperature were probably the most common measurements. Over the past 20 years, efforts have been made to provide more comprehensive records of weather, using computerized instruments to read temperature, moisture, wind, and solar energy at regular intervals. In April 2015, a digital camera was permanently mounted and focused on a stand of conifers on the eastern shore of Lincoln Pond, to provide visual records of weather conditions at the Preserve. Approximately 20 images of this portion of Lincoln Pond have been captured each day since its installation, yielding a tremendous dataset created through this installation. The main purpose of this “Phenocam Network” is to track growth stages of trees over time, using both regular color and infrared images, but the images are also useful for visitors who want to know about snow and ice conditions, and water levels. Public access to the images is at https://phenocam.sr.unh.edu/webcam/sites/huyckpreserveny/. 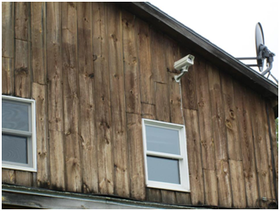 Digital camera mounted above window of the research center that feeds images into the Phenocam Network
Other technologically advanced weather monitoring has been taking place at the Preserve for decades, with the most recent station erected in 2006. Despite the long-term nature of weather data collection at the Preserve, there has been a need for more accurate long-term data, better data management, and improved data access. At the Science Symposium and Environmental Monitoring Workshop held on August 4, 2018, a consensus was reached among the researchers and conservation partners in attendance: improved weather data was the most important monitoring improvement needed at the Preserve. The symposium helped define the need for long, continuous, standardized measurements, solid data management, and easy data access beyond our established capacity that would help detect significant changes in climate. 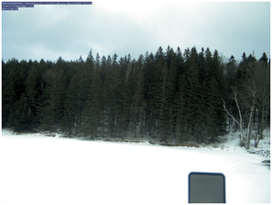 Scene of the southeastern shoreline of Lincoln Pond, downloaded from the Phenocam Network, February 20, 2020
​In 2019 Huyck Preserve Director Anne Rhoads, PhD reached out to University of Albany (UAlbany) colleagues about updating the old weather station. The University’s Department of Geography and Planning has had long-lasting, productive relations with the Huyck Preserve. During the last decade, several UAlbany professors and their graduate students have conducted research at the Huyck Preserve (including professors George Robinson, Alexander Buyantuev, Shiguo Jiang, and Andrei Lapenas, and graduate students Claire Gaffey, Marie Orton, and others). Among their projects, perhaps the most visible to Huyck Preserve visitors is the application of Aerial Unmanned Vehicles (AUV) (drones) for studies of forest productivity and health. Rhoads and Lapenas determined that a joint project and shared cost would allow the Preserve to obtain a modern, state-of-the-art, professional weather station with internet capabilities that would serve the research needs of UAlbany scientists and many others. A generous member of the Preserve and several members of the board of directors quickly pledged to fund the Preserve’s portion of the new station. Working together, a new, more modern and capable weather station was built outside of the Eldridge Research Center in 2019. This cooperation brings benefits to both organizations. Increased reliability of weather data from the Huyck Preserve is already enabling UAlbany researchers to apply for new grants and perform important work at the Huyck Preserve - work that allows the team to look ahead and make predictions about the future of the ecosystems of the Huyck Preserve and surrounding area.

Andrei Lapenas, PhD is Professor and Chair of the Department of Geography and Planning at the University at Albany (UAlbany). During the late 1980s, Andrei and a group of colleagues developed an original approach for long-term predictions of climate change now known as the method of paleoanalogues or paleocalibration. In the mid 1990s, Andrei’s interests turned from the oceanic to the terrestrial carbon cycle, and he moved to UAlbany where he began a study of  the Historic Russian Soil Collection, a large set of late 19th and early 20th century soil “monoliths.” Andrei's research is now focused on forest ecophysiology and especially the physical and biogeochemical feedback mechanisms linking climate change, plant phenology, and soil. He began research at the Huyck Preserve in 2012.   ​

George Robinson, PhD began conducting research at the Huyck Preserve in the 1990s. After a long career, he is now Emeritus Professor of Biological Sciences at the University at Albany. His current work at the Preserve involves studying the phenology (timing of biological events in relation to changes in season and climate) and carbon allocation (the way resources are shared among leaves, stems, and roots) of coniferous trees in response to longer growing seasons. George is a member of the Preserve’s Scientific Advisory Committee, which he chaired for 15 years; has served on the Board of Directors (1998-2012); and spent a summer as the Preserve’s resident Senior Research Fellow (2014).